Congratulations! Anthony Fung’s new book is finally out! Here is some information of his book. Please get your library have a couple of copies of this book. 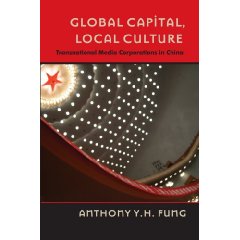 Review
Anthony Y.H. Fungs study of the localization of transnational media in China is perceptive and fascinating. He writes with impressive insight and experience, as well as a good deal of enthusiasm for his subject. We not only learn about forms of entertainment media and popular culture in China after its entry into the WTO, but about how the cultural logic of political economy can be used to understand media. Fung has made a valuable contribution to the literature [on this subject]. –Janet Wasko, University of OregonThis book administers a much-needed antidote to some of the common myths about the politics underlying the marketization of the Chinese media industries in recent years. Drawing on extensive industry interviews, this book demonstrates the importance of taking an approach that, as Fung puts it, considers politics before economics in the study of the Chinese markets. This is a fundamental critique of the orthodoxies of globalization, which provides a highly nuanced understanding of the organization of media production and cultural consumption in China today.Graeme Turner, University of Queensland –Graeme Turner, University of Queensland

Product Description
This book examines the way transnational media companies have entered the Chinese entertainment market. Based on the authors ethnographic work and over 100 interviews with senior executives in global media corporations, including Warner Bros. Pictures, Viacoms MTV Channel, and Nickelodeon and News Corporations Channel V, the book analyzes the concrete globalization/localization strategies of these corporations and how they cope with the various political and economic constraints of working in China.

About the Author
Anthony Y.H. Fung is an associate professor in the School of Journalism and Communication at the Chinese University of Hong Kong. He received his Ph.D. from the School of Journalism and Mass Communication at the University of Minnesota. His research interests include political economy of transnational media corporations, popular culture, and cultural studies.